Diversity is not about being equal

Many diversity strategies have been founded in the belief that everyone should be equal, but is that the right approach? I recently saw this graphic on LinkedIn. Great game, great crowd but that’s not the story here. It’s a “spot the difference” between the spectators in the foreground of the two images and their view of the game. 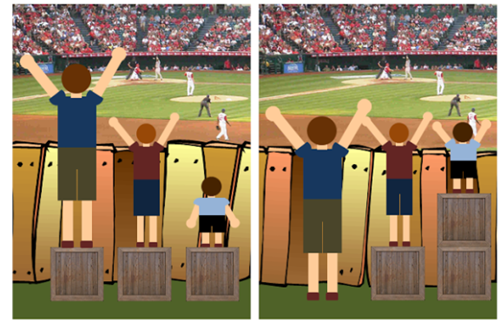 Wow – doesn’t this conjur up some great ideas for achieving a more representative diversity in our workplaces? In the current environment of diversity fatigue and backlash, this graphic cuts through the notion of unfairness and resistance that has become prevalent. This graphic shows that there isn’t a winner and a loser (which in the context of diversity is, quite frankly, a ridiculous notion). Everyone gets to see the game by working together. Instead of shifting crates, we could be shifting working hours, office systems or other resources, and instead of focusing on action, we focus on outcomes.

So I spoke with Patrick Albina, Founder and Director of Quintessential Consulting, who had posted this little gem online. An ex-Air Force Officer, Patrick now helps improve workplaces with new and practical people-focused systems. He believes that striving to achieve equality is not necessarily the optimal solution to the diversity problem and here’s what he has to say.

Why is equality a problem in managing diversity?

People tend to default to a concept of “equal” without fully understanding what that means, look at gender diversity, for example. Males and females are not the same and we need to recognise and accept that this has no bearing on their knowledge and skills.  We need to enable people to be themselves, leverage their differences as strengths and enable them to thrive in the workplace. At an organisational level that means we need strategies around recognising “equivalence”.

Take the example of leave entitlements as a concept. The equal view would be that everyone gets the same amount of leave regardless of their situation. Organisations often create policies based on equality principles, such as annual and carers leave, for example.  I’m currently performing some work in the Aboriginal and Torres Strait Islander sector and they have specific needs that are not necessarily acknowledged in many corporate policies.  For example, a sense of equivalence might require tailoring your policies to acknowledge the need for Sorry Business, and other related family matters that are of cultural significance to Indigenous Australians.  The focus here is not on a ‘one-size-fits-all’ equal leave entitlement, but rather a variable approach that achieves an equivalent outcome.

Easy in principle, but difficult in practice. How can organisations do this?

Policies need to be aligned to seeking equivalent outcomes rather than applying equal actions. We can grasp equal because it is measurable and clear. Equivalence requires judgement and compromise, because what is important for me is different to what is important for you. Policies have to be able to manage that variety without backlash and avoid the tendency to jump to conclusions.

We often think that policies need to be highly standardised, where in fact they should be based on a set of principles so that their application can be adapted to meet the desired outcome, which may be different depending on the situation. You can have a common definition of a principle, but how that is applied at a local level can be variable providing that it aligns to the guiding principle.

Who is responsible for implementing equivalent outcomes?

In my experience, how equivalence is implemented varies from organisation to organisation. It depends on the people leading the organisation. If leaders are progressive and authentically support this approach, the notion of equivalence can be remarkably easier to implement than in organisations that have tokenistic diversity policies.

Regardless of who implements ‘equivalence’, the organisation has to accept that it may look different for everyone, but for all intents and purposes, there is an equivalent outcome.  This may be a difficult concept to grasp when applying it in the workplace, but it is journey that we all have to undertake.